A War Between Countries 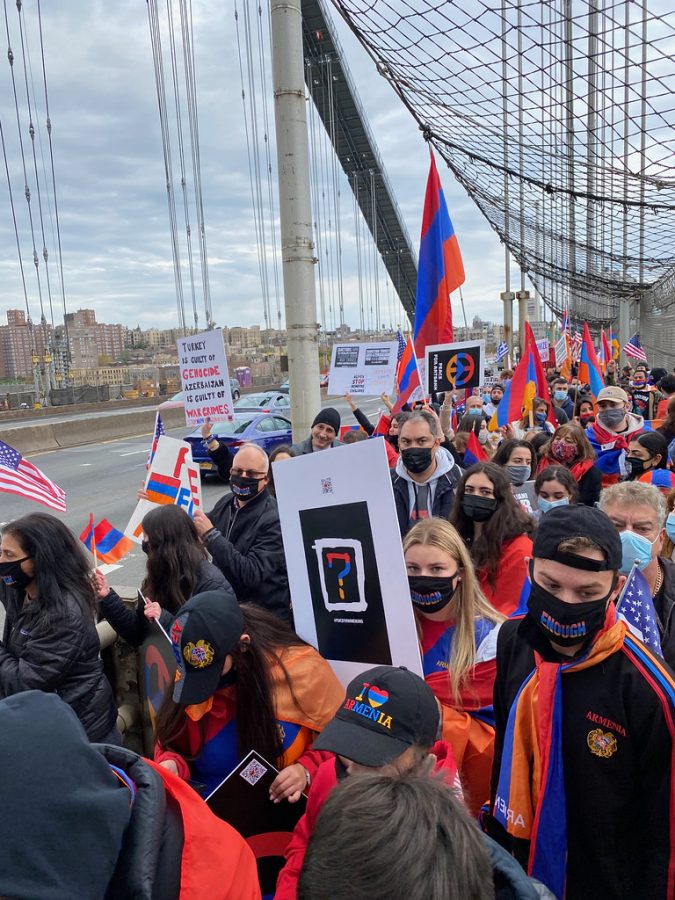 This is a Photo of a protest for Artsakh that took place on the George Washington Bridge in New York.

For the past couple of weeks, a horrible event that most people don’t know about has been breaking out. Sept. 27 was when the war was officially started, it started in a small country called Artsakh (located in Asia) is in the midst of a war. The war was started by a slightly larger state called Azerbaijan.

In the early 90s the Soviet Union took the city of Artsakh and gave it to Azerbaijan. However, after the Soviet Union dismembered, Armenian residents took up the population of Artsakh. Azerbaijan never received the land so they have been attacking Armenia in order to regain Artsakh.

Azerbaijanis armed forces continue to bomb innocent civilians and destroy infrastructures. Almost 1,000 people have been injured or killed, many buildings have been destroyed, churches have been bombarded, small surrounding cities near Artsakh are left without electricity, homes are vanishing, children are sheltering, and young innocent men and women are forced to stand up and fight this war to protect their homeland.

The war is also supported by Turkey. Turkey is responsible for the Armenian genocide in 1915 when 1.5 million innocent men, women, and children were injured and slaughtered. The brave men and women in Armenia today are fighting frontline in a war to protect their homeland, and gain peace to prevent another genocide from happening.

Karabakh war leaves civilians shell-shocked and bitter by BBC news states, “Armenia’s prime minister has spoken of troops retreating in the face of heavy fighting. Meanwhile, Azerbaijan says it has destroyed missile sites inside Armenia itself, and its president has said military operations are continuing.”

On the news channel USArmenia, daily updates on the war are provided. As of today, over 400 soldier lives were cut short and over 700 brave young heroes have been severely injured. This is not what Armenians wanted, but rather is they had to face and overcome.

Today, people all over the world are standing united with Armenia by conducting fundraisers and protests to end this war. Over the course of the past several weeks, millions of dollars have been collected at fundraisers benefiting Artsakh and Armenia. In addition to money, many essentials were donated to help the shelters, the homeless, and feed the hungry. People from Armenia want to raise up to 100 million dollars.

Since the beginning of this war, many peaceful protesters have gathered all over the world to raise awareness and ask for help, utilizing all media platforms and government officials to come together in an effort to defend Artsakh and Armenia.
As of Monday, Oct. 27, a cease-fire from the US has been announced. However, Azerbaijan and Armenia have accused each other of violating a new ceasefire in the countries’ conflict over the mountainous enclave of Nagorno-Karabakh according to Wikipedia.

As the war continues there is not much we can do other than raise awareness, money, supplies, and have hope as we wait for the war to end.