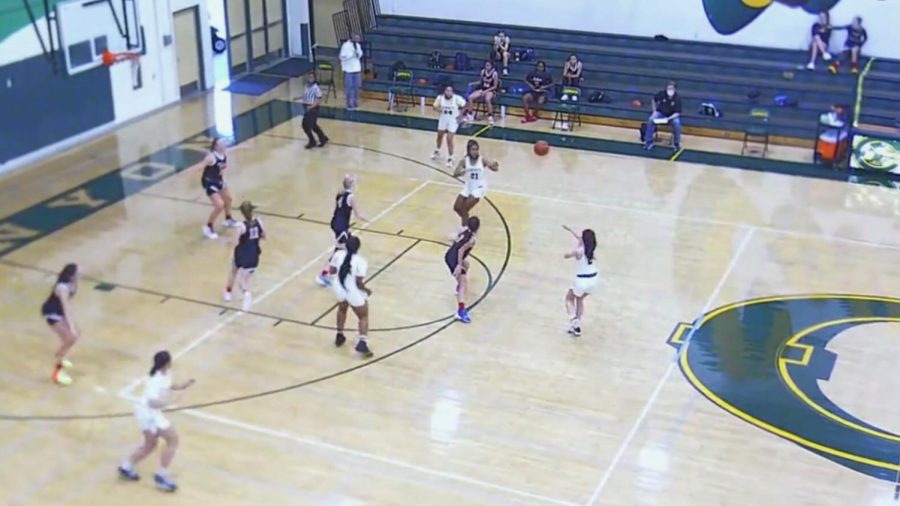 With many sports, including basketball, being rushed into their season, it has been a crazy few months. Just three months ago, athletes were told their season was most likely not going to happen, and now here we are halfway through the basketball season. Girls Varsity Basketball has had a successful season so far. As of right now,they are 3-2, making them third in league.

Their season kicked off on April 20, 2021, against Golden Valley High School. Canyon held a fifteen point lead throughout most of the game but started to lose it around the end of the third quarter. This left them victorious, winning by five points, beating Golden Valley 41-36 and starting their record off strong 1-0.

Just three days later the Canyon’s girls varsity basketball team faced Valencia High School’s team. Unexpectedly, Valencia went on an 11-0 run and Canyon was down about twenty points for a majority of the game. During the third quarter, Canyon decided to full-court press which held Valencia to two points in eight minutes and cut Valencia’s lead by ten points. Sadly, it was not enough and Canyon lost 52-38 making them 1-1.

Shortly after, Canyon played against Hart High School. Hart went on a 6-0 run the first quarter, but Canyon quickly picked it up and held a ten point lead for the rest of the game. The Canyon girls varsity basketball team finished the game strong with a score of 57-50.

Their fourth game was at home versus West Ranch High School. Canyon kept a big lead throughout the game and got the job done by beating West Ranch 60-33. This left them with one game left in the first half of the season.

The last game in the first half of the season against Saugus High School was definitely one of the best games the Canyon girls varsity basketball team has played so far. Although they did not come out on top, they held their heads high, knowing they had good energy, great shooting, and better defense. Canyon’s Aaliyah Garcia and Genesis Gonzales each had career highs of 23 points. The final score was 75-69, making Canyon 3-2.

The Canyon girls varsity basketball team has faced some fierce competitors so far. We can only hope this season fulfills their expectations of being first in league and making it to the playoffs!