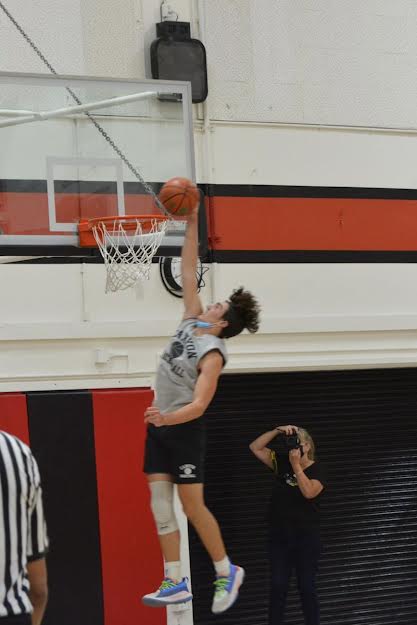 Our beloved Canyon Cowboys recently played against Westlake High School, a very prestigious school located in Ventura. They are ranked the 26th best high school in the state of California. Coming into the game, our basketball team was definitely prepared to play their hearts out.

Losing the week before, Canyon was ready to win and show they are the real deal. Senior, Matthew Heyne,put up 21 points and eight assists making him Canyons leading scorer. He showed that he can do everything on both ends of the floor. Heyne received a lot of help from his teammates, including an additional 18 points and eight rebounds from Senior center, Brody Baumgartner, and 16 points from Junior, Lincoln Phillips.

When asked about their offense throughout the game against a highly skilled team, Baumgartner states that, “We were able to score pretty consistently and once we went on a run we didn’t look back”, adding that their offense was created through finishing down low and knocking down their three pointers. Their offensive performances are what really put Canyon over the top and lead to their 67-63 win over Westlake.

Senior, Brandon Boldroffalso helped carry the offense with his 12 points and proved his defensive worth, recording two blocks within the game. Baumgartner claimed that, “There were some lapses but overall we played good defense”, something that they needed desperately in order to beat a talented team.

The Canyon Cowboys varsity team has been working very hard and believe that they can be one of the top teams within the Foothill league. This win against Westlake was definitely a confidence booster and we are looking forward to what this extremely talented team does during league.